UPXP is a rule changing project that gives the opportunity to restaurants to stop paying commission to third parties & start to use a part of these savings to reward their customers with crypto.

We believe in the power of the community

The UPXP project finds its strength and meaning through these believes

UPXP is a breakthrough in the current business model of paying commissions on turnover.

It will eliminate the financial burden represented by commissions paid by points of sale to intermediaries who bring them customers.

In exchange, the point of sale will return one-third of the money saved to their customers in UPXP cryptocurrency and keep two-thirds to increase their profits.

UPXP will free the point of sale from third parties that take advantage of their dominant position.

These commissions are paid to the third parties

These commissions represent tens of thousands of dollars per year

Commission each time you order food via an app

Credit card commission each time you pay your food

Pay no commission
or fees to UPXP

get crypto
from restaurants

have no commission to pay on their turnover

get crypto
from restaurants

For the restaurant owners

UPXP rewards is integrated with the most POS availabe on the market. The restaurant will not pay additional fees to use the UPXP ecosystem. Connect UPXP to your POS, booking solution, website, CRM, Digital menu…

Each time you order food or book a table via the UPXP application you earn crypto. The restaurant’s POS will credit your wallet with the UPXP token.

will order directly at the restaurant
& earn UPXP

will get customers and orders
without paying commission

will get 99% of the delivery fee
without giving a part

UPXP rewards is integrable with most of the POS, booking, delivery applications

will order and book via UPXP
to earn crypto

will get customers and orders
without paying commission

will get 100% of the delivery fee
without give a part

will send offer to thousand of restaurants in one second

Because the big players have to spend a big part of their revenue on advertisment, the current business model based on taking commission on food orders is still not profitable. From the restaurants side, they have to increase the prices to carry these charges or work for peanuts. In the same time the delivery guys see their income become less and less.

UPXP will not charge any commission or fee to the restaurant, this means it’s in the interest of the restaurant to do the promotion of UXPX. With all the money saved by the restaurants, they don’t need to increase their prices to be profitable. They will use the opportunity to reward the consumers with our UPXP token.

UPXP has a limited total supply of 1.1.00.000.000 tokens, the value will increase in proportion to the number of users and restaurants who will use the UPXP reservation and ordering App.

After the ICO, only the consumers or the early investors will be able to sell their tokens to the restaurants who need UPXP tokens to be visible on the UPXP App. 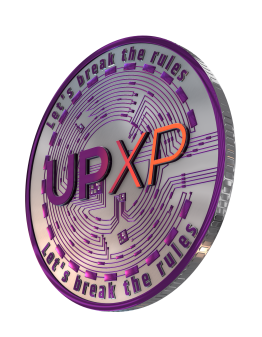